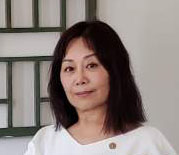 Ms. Kim was born and raised in Taegu South Korea. She moved to the United States in 1982, after arriving in New York City she graduated CUNY  College in 1988 computer system analyst and attended St. John University studying Business then moved to Maryland in 2000.

Ms. Kim served during the Dinkins administration as New York City Mayor in 1990 for Asian Task force team and an Executive Vice President of N.G.N New York City branch Billboard company.  Currently, she is a licensed realtor and a small business owner of an Asian art gallery.

Ms. Kim is the recipient of many awards which include: in 2015 the Maryland State Governor’s Citations, in 2014 she received multi Maryland General Assembly official citations and a citation from the President of The Republic of Korea.